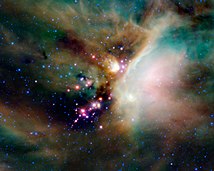 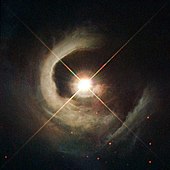 V1331 Cyg, a YSO surrounded by a reflection nebula

Young stellar object (YSO) denotes a star in its early stage of evolution. This class consists of two groups of objects: protostars and pre-main-sequence stars.

A star forms by accumulation of material that falls in to a protostar from a circumstellar disk or envelope. Material in the disk is cooler than the surface of the protostar, so it radiates at longer wavelengths of light producing excess infrared emission. As material in the disk is depleted, the infrared excess decreases. Thus, YSOs are usually classified into evolutionary stages based on the slope of their spectral energy distribution in the mid-infrared, using a scheme introduced by Lada (1987). He proposed three classes (I, II and III), based on the values of intervals of spectral index '"`UNIQ--postMath-00000001-QINU`"':[1]

This classification schema roughly reflects evolutionary sequence. It is believed that most deeply embedded Class 0 sources evolve towards Class I stage, dissipating their circumstellar envelopes. Eventually they become optically visible on the stellar birthline as pre-main-sequence stars.

Classification of YSOs by mass

These stars may be differentiated by mass: Massive YSOs, intermediate-mass YSOs, and brown dwarfs.

Retrieved from "https://thesciencearchives.miraheze.org/w/index.php?title=Young_stellar_object&oldid=14810"
Categories:
Cookies help us deliver our services. By using our services, you agree to our use of cookies.