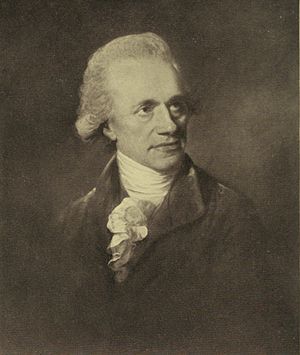 British astronomer, composer and brother of fellow astronomer Caroline Herschel, with whom he worked. Born in the Electorate of Hanover, Herschel followed his father into the Military Band of Hanover, before migrating to Great Britain in 1757 at the age of nineteen.

Herschel constructed his first large telescope in 1774, after which he spent nine years carrying out sky surveys to investigate double stars. The resolving power of the Herschel telescopes revealed that the nebulae in the Messier catalogue were clusters of stars. Herschel published catalogues of nebulae in 1802 (2,500 objects) and in 1820 (5,000 objects). In the course of an observation on 13 March 1781, he realized that one celestial body he had observed was not a star, but a planet, Uranus. This was the first planet to be discovered since antiquity and Herschel became famous overnight. As a result of this discovery, George III appointed him Court Astronomer. He was elected as a Fellow of the Royal Society and grants were provided for the construction of new telescopes.

Herschel pioneered the use of astronomical spectrophotometry as a diagnostic tool, using prisms and temperature measuring equipment to measure the wavelength distribution of stellar spectra. In addition, Herschel discovered infrared radiation.[3] Other work included an improved determination of the rotation period of Mars,[4] the discovery that the Martian polar caps vary seasonally, the discovery of Titania and Oberon (moons of Uranus) and Enceladus and Mimas (moons of Saturn). Herschel was made a Knight of the Royal Guelphic Order in 1816. He was the first President of the Royal Astronomical Society when it was founded in 1820. He died in August 1822, and his work was continued by his only son, John Herschel.

In March 1781, during his search for double stars, Herschel noticed an object appearing as a disk. Herschel originally thought it was a comet or a stellar disc, which he believed he might actually resolve.[5] He made many more observations of it, and afterwards Russian Academician Anders Lexell computed the orbit and found it to be probably planetary.[6][7]

Herschel agreed, determining that it must be a planet beyond the orbit of Saturn.[8] He called the new planet the "Georgian star" (Georgium sidus) after King George III, which also brought him favour; the name did not stick.[9] In France, where reference to the British king was to be avoided if possible, the planet was known as "Herschel" until the name "Uranus" was universally adopted. The same year, Herschel was awarded the Copley Medal and elected a Fellow of the Royal Society.[7] In 1782, he was appointed "The King's Astronomer" (not to be confused with the Astronomer Royal).[10]

On 1 August 1782 Herschel and his sister Caroline moved to Datchet (then in Buckinghamshire but now in Berkshire). There he continued his work as an astronomer and telescope maker.[11] He achieved an international reputation for their manufacture, profitably selling over 60 completed reflectors to British and Continental astronomers.[12]

Retrieved from "https://thesciencearchives.miraheze.org/w/index.php?title=William_Herschel&oldid=10218"
Categories:
Cookies help us deliver our services. By using our services, you agree to our use of cookies.