From the Science Archives, the open-project database of science information
Jump to navigation Jump to search
Not to be confused with Sagittarius Dwarf Irregular Galaxy.

Officially discovered in 1994, by Rodrigo Ibata, Mike Irwin, and Gerry Gilmore,[7] Sgr dSph was immediately recognized as being the nearest known neighbor to the Milky Way at the time. (Since 2003, the newly discovered Canis Major Dwarf Galaxy is considered the actual nearest neighbor.) Although it is one of the closest companion galaxies to the Milky Way, the main parent cluster is on the opposite side of the galactic core from Earth, and consequently is very faint, although covering a large area of the sky. Sgr dSph appears to be an older galaxy, with little interstellar dust and composed largely of Population II stars, older and metal-poor, as compared to the Milky Way. No neutral hydrogen gas related to Sgr dSph has been found.[8]

Further discoveries by astrophysics teams from both the University of Virginia and the University of Massachusetts Amherst, drawing upon the 2MASS Two-Micron All Sky Infrared Survey data, revealed the entire loop-shaped structure. In 2003 with the aid of infrared telescopes and super computers, Steven Majewski, Michael Skrutskie, and Martin Weinberg were able to help create a new star map, picking out the full Sagittarius Dwarf presence, position, and looping shape from the mass of background stars and finding this smaller galaxy to be at a near right angle to the plane of the Milky Way.[9] 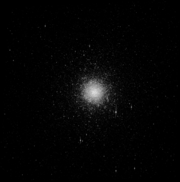 Messier 54, believed to be at the core of Sgr dSph. Greyscale image created from the HST's Advanced Camera for Surveys 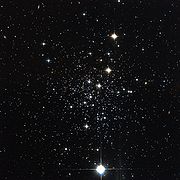 Palomar 12, believed to have been captured from the Sgr dSph about 1.7 Gya

Sgr dSph has four known globular clusters with one, M54, apparently residing at its core. It is also dynamically linked to the "young" globular Terzan 7 as well as to Terzan 8 and Arp 2.[10] Additionally, Palomar 12 is now generally thought to also be associated with Sgr dSph [11][12] as well as Whiting 1.[13][14][clarification needed]

Sgr dSph has multiple stellar populations, ranging in age from the oldest globular clusters (almost as old as the universe itself) to trace populations as young as several hundred million years (mya). It also exhibits an age-metallicity relationship, in that its old populations are metal poor ([Fe/H]=−1.6 ± 0.1) while its youngest populations have super-solar abundances.[14][15]

Based on its current trajectory, the Sgr dSph main cluster is about to pass through the galactic disc of the Milky Way within the next hundred million years, while the extended loop-shaped ellipse is already extended around and through our local space and on through the Milky Way galactic disc, and in the process of slowly being absorbed into the larger galaxy, calculated at 10,000 times the mass of Sgr dSph.

At first, many astronomers thought that Sgr dSph had already reached an advanced state of destruction, so that a large part of its original matter was already mixed with that of the Milky Way. However, Sgr dSph still has coherence as a dispersed elongated ellipse, and appears to move in a roughly polar orbit around the Milky Way as close as 50,000 light-years from the galactic core. Although it may have begun as a spherical object before falling towards the Milky Way, Sgr dSph is now being torn apart by immense tidal forces over hundreds of millions of years. Numerical simulations suggest that stars ripped out from the dwarf would be spread out in a long stellar stream along its path, which were subsequently detected.

However, some astronomers contend that Sgr dSph has been in orbit around the Milky Way for some billions of years, and has already orbited it approximately ten times. Its ability to retain some coherence despite such strains would indicate an unusually high concentration of dark matter within that galaxy.

In 1999, Johnston et al. concluded that Sgr dSph has orbited the Milky Way for at least one Gya and that during that time its mass has decreased by a factor of two or three. Its orbit is found to have galactocentric distances that oscillate between ~13 and ~41 kpc with a period of 550 to 750 million years. The last perigalacticon was approximately fifty million years ago. Also in 1999, Jiang & Binney found that it may have started its infall into the Milky Way at a point more than 200 kpc away if its starting mass was as large as ~1011M☉.

The models of both its orbit and the Milky Way's potential field could be improved by proper motion observations of Sgr dSph's stellar debris. This issue is under intense investigation, with computational support by the MilkyWay@Home project.

A simulation published in 2011 suggested that the Milky Way may have obtained its spiral structure as a result of repeated collisions with Sgr dSph.[6]