This is a "dark interstellar object" with a mass like a planet. Those "rogue planets" are alternatively called "planetars", "planemos", "vagabonding planets" or simply "vagabonds". Freeware (c) Jan Rüggeberg.

A rogue planet or a free-floating planet is a planetary-mass object that is not gravitationally attached to any star or brown dwarf, floating in space as an independent object. Such objects have been probably ejected from their solar systems after being formed.

Some of them are formed in a similar way to stars. Unlike free-floating planets, formed in their own protoplanetary disks, the planets would even be called sub-brown dwarfs, which is a brown dwarf-like object having mass less than the lower limit on brown dwarf mass 13 times Jupiter's mass.

PSO J318.5-22 is a confirmed rogue extrasolar object localed in the constellation Capricornus. It is approximately 80 light-years away.[1] It was discovered in 2013. PSO J318.5-22's age is 12 million years old[1], its diameter is 1.53 times Jupiter's one, and its mass is 6.5 times Jupiter's one.[2] Its temperatures inside its clouds are approximately 1,200 K.[2] The clouds was probably made of hot dust and molten iron, showing how widespread clouds are in planets.[3] 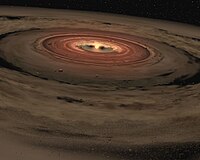 OTS 44 is a very young free-floating planet (but is most likely a sub-brown dwarf) located in the constellation Chamaeleon, it lies at 554 light-years from Earth. If classified as a (sub-)brown dwarf, it would be probably one of the least massive known brown dwarfs with a mass of 11.5 times the mass of Jupiter.[4] When it was born, it had an upper limit of about 5.7[5] times the size of Jupiter (>790,000 km across) and is shrinking to 2.3 times Jupiter's size[6], which is equal to 320,000 km across. It is surrounded by a circumstellar disk of dust and particles of rock and ice. It was discovered by Oasa on 1998, being the first rogue planet or sub-brown dwarf discovered.

Cha 110913-773444 is possibly an extremely young free-floating planet or a sub-brown dwarf that is surrounded a protoplanetary disk containing planets or exomoons. It lies at a distance of 529 light-years from Earth. It was discovered by American astronomer Kevin Luhman on 2004.[7]

CFBDSIR J214947.2-040308.9 is a free-floating brown dwarf or rogue planet located in the constellation Dorado, it lies between 130 light years from Earth. It has temperature of 700 K and a diameter of 192,000 km. Its mass is uncertain, it could be as light as 2 or as massive as 40 times that of jupiter. Assuming the upper limit of 40 Mjup is correct, it would be classified as a brown dwarf with an estimated age between 2 and 3 billion years old. If classified as a rogue planet, it would be 500 million years old.