Template:Confused A quasi-star (also called black hole star) is a hypothetical type of extremely massive star that may have existed very early in the history of the Universe. Unlike modern stars, which are powered by nuclear fusion in their cores, a quasi-star's energy would come from material falling into a central black hole.[1] 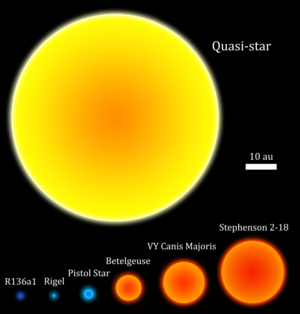 A quasi-star is predicted to have formed when the core of a large protostar collapses into a black hole during its formation and the outer layers of the star are massive enough to absorb the resulting burst of energy without being blown away (as they are with modern supernovae). Such a star would have to be at least 1,000 solar masses (2.0×1033 kg).[1] These stars may have also been formed by dark matter halos drawing in enormous amounts of gas via gravity, in the early universe, which can produce supermassive stars with tens of thousands of solar masses.[2][3] Stars this large could only form early in the history of the Universe before the hydrogen and helium were contaminated by heavier elements; thus, they may have been very massive Population III stars.

Once the black hole had formed at the core of the protostar, it would continue generating a large amount of radiant energy from the infall of additional stellar material. This energy would counteract the force of the gravity, creating an equilibrium similar to the one that supports modern fusion-based stars.[4] A quasi-star is predicted to have had a maximum lifespan of about 7 million years,[5] after which the core black hole would have grown to about 1,000–10,000 solar masses (2×1033–2×1034 kg).[1][4] These intermediate-mass black holes have been suggested as the origin of the modern era's supermassive black holes. Quasi-stars are predicted to have surface temperatures limited to about 4,000 K (3,730 °C),[4] but, with diameters of approximately 10 billion kilometres (66.85 au) or 7,187 times that of the Sun, each one would produce as much light as a small galaxy.[1]

Retrieved from "https://thesciencearchives.miraheze.org/w/index.php?title=Quasi-star&oldid=14768"
Categories:
Cookies help us deliver our services. By using our services, you agree to our use of cookies.