From the Science Archives, the open-project database of science information that barely anyone can edit
(Redirected from Pulsar)
Jump to navigation Jump to search 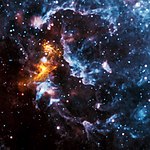 Radiation from the pulsar PSR B1509-58, a rapidly spinning neutron star, makes nearby gas glow in X-rays (gold, from Chandra) and illuminates the rest of the nebula, here seen in infrared (blue and red, from WISE).

A neutron star is a degenerate star whose structure resembles a giant atomic nucleus; they are made of neutrons with lesser amounts of protons and electrons. They are made when the atoms within the collapsing cores of dying stars are able to hold slightly against gravitational collapse, but the protons and electrons are pressed together, forming neutrons. Neutron stars are as dense as Mount Everest crushed into a sugar cube; they are less than 50 kilometers in diameter. They can support planets, but those planets cannot host life due to radiation emitted from the neutron star. Neutron stars with planets include PSR (B) 1257+12.

Neutron stars mostly consist of neutronium isotopes and have temperatures exceeding 600 000 degrees Kelvin, making them blue, blue-white, white, blue-gray, or green in color. Because they are so hot, most of their light is X-rays, which humans cannot see, so they might also dark, dull, or an almost black midnight blue in color. The core of a neutron star may contain quark soup or quark-gluon plasma. The crust is crystalline and may consist of iron nuclei. Despite their ferocious temperatures and mass, they can never be more luminous as the Sun due to their small size.

Retrieved from "https://thesciencearchives.miraheze.org/w/index.php?title=Neutron_star&oldid=14973"
Category:
Cookies help us deliver our services. By using our services, you agree to our use of cookies.