Here is a list of several potentially habitable Earth-like exoplanets.

Size Comparison between the Sun and Gliese 581

Gliese 581 is a red dwarf located in the constellation Libra. The star is known to be orbited by 5 planets[1] and a debris disk.[2] There is a debate about if Gliese 581 d does exist or not, but new analysis of data suggests it does.[3] The most Earth-like of the planets is Gliese 581 g.

Kepler-186 is a K-type star located 500 light years away in the Cygnus constellation. It is half the size and mass of the sun. The fifth planet orbiting it, Kepler-186 f, could be potentially habitable for life, due to it residing in the star's habitable zone, the area where the temperature is just right to support water, which is a key ingredient for life to exist.

Relative sizes of a few of the best-known habitable-zone planets discovered to date alongside Earth. Left to right: Kepler-22b, Kepler-69c, Kepler-62e, Kepler-62f and Earth (except for Earth, these are artists' renditions).

Kepler-22 is a sun-like star located 500 light years away in Cygnus as well. It is orbited by one planet, which is in the Habitable Zone. The planet is around 2.4 times the radius of Earth, however, for a time it was the smallest habitable exosolar planet orbiting its star. Scientists, however, still have no clues about its chemical composition.

Another planet also in Cygnus and habitable was Kepler-452 b, also orbiting a Sun-like star. It was discovered in 2015 and has many similarities with its more popular counterpart. However, these might not be the best places to go to after leaving Earth as they are at least 500 light years away. 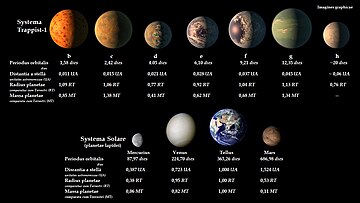 Size comparison of the objects in the TRAPPIST-1 system

TRAPPIST-1 and its seven planets.

Retrieved from "https://thesciencearchives.miraheze.org/w/index.php?title=Potentially_Habitable_Earth-like_Planets&oldid=4554"
Cookies help us deliver our services. By using our services, you agree to our use of cookies.