Plate Tectonics is a foundation principle of Geology. The Earth's lithosphere (the crust and the uppermost part of the mantle) is cracked into 12 major pieces called tectonic plates. These plates move around, but very slowly, due to the dissipation and friction coming from heat-driven convention currents in the mantle. They can also be between 8 to 50 kilometers thick, depending on being in the ocean or the crust. Plate tectonics is responsible for the movement of the continents.

A map of the Earth's tectonic plates. Note that the Indo-Australian plate has been divided into two, but for convenience, they are regarded as part of the same plates.

There are nine major tectonic plates:

There are three types of boundaries: Convergent boundaries, which cause earthquakes and other tremors, divergent boundaries, where plates move away from each other, and transform fault boundaries, where the plate is cut. Plates can form volcanoes, mountains, and oceanic ridges due to their movement. Subduction occurs when two plates meet, causing one to be driven under the other plate. Volcanoes are formed when parts of the subducted and melted tectonic plate melt and rise to the surface as magma. Earthquakes are formed when pressure between the plates causes one of them to jolt and rupture along a fault line. Where an earthquake occurs in the ocean, a tsunami can occur.

The Pacific Ring of Fire

The Ring of Fire is a region in the Pacific Ocean where many subduction zones and transform boundaries occur. The effects of these plate movements can be observed as earthquakes and volcanic eruptions occur in California, the Kamchatka peninsula, Japan, the Philippines, and New Zealand. Notable features of the Ring of Fire include the San Andreas Fault in California, where the Pacific plate carries the city of Los Angeles northward, the Yellowstone Supervolcano and Mt. Saint Helens, Mt. Fuji, the Mariana Trench, and the Alpine Fault and the Southern Alps in New Zealand. 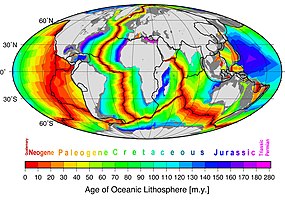 Map showing the ages of the ocean floor. The red zones are created by seafloor spreading and are younger than the blue zones.

Plate Tectonics are the key factor behind the principle of the drifting of the continents. 250 million years ago, all of the Earth's continents were joined up as a single landmass called Pangaea. Earthquakes and volcanic activity caused by Plate Tectonics broke the landmass apart into smaller continents. The continents are still moving, at around 5 mm per month. It is believed that in 250 million years, another giant supercontinent will form. This supercontinent is called Novopangaea

The theory was first hypothesized by French scientist Antonio Snider-Pellegrini. In 1903, an Italian scientist «revised» the theory and hypothesized the Expanding Earth theory, showing that 180 million years ago, the Earth was once half its size and expanded, breaking Pangaea (which covered the entire face of the Earth) into smaller continents. In 1912, German meteorologist Alfred Wegener revised the theory even further, scrapping the expansion of the Earth, and based it on matching coastlines and fossil trails in South America, Africa,

India, Antarctica, and Australia. Everyone ridiculed Wegener's theory until the 1950s, when Seafloor Spreading (see above) was validated.

Retrieved from "https://thesciencearchives.miraheze.org/w/index.php?title=Plate_Tectonics&oldid=15482"
Categories:
Cookies help us deliver our services. By using our services, you agree to our use of cookies.