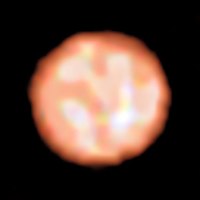 π1 Gruis (or Pi1 Gruis) is an S5[2]-type star in the Grus constellation located near 530 light-years from Earth. It forms a close naked-eye double with the unrelated star π2 Gruis four arc-minutes away. The star is one of the largest known stars, with a diameter 694 times greater than the Sun's own diameter.[3] Giant convention bubbles have been found to occur on Pi1 Gruis's surface (pictured).

Pi1 Gruis is orbited by a small yellow main sequence star, with the spectral type of G0V.[4]

The star was first discovered by

French astronomer Nicolas Louis de Lacaille in 1756, but was not given a name. Instead, Lacaille gave the designation of "π Gruis" to π2 Gruis. Later,

British astronomer Thomas Brisbane who designated this star as π1. Pi1 Gruis was one of the first 17 stars defined as S-stars by the

American astronomer Paul W. Merrill in 1922; the only star not observed from Mount Wilson due to being only visible in the Southern Hemisphere.[5] Analysis of the star's spectrum showed bands indicating the presence of the non-natural radioactive element technetium,[6] as well as oxides of other elements such as zirconium, lanthanum, cerium and yttrium, but strangely not titanium or barium, both of which have been recorded in other S stars.[7]

Retrieved from "https://thesciencearchives.miraheze.org/w/index.php?title=Pi1_Gruis&oldid=4049"
Categories:
Cookies help us deliver our services. By using our services, you agree to our use of cookies.