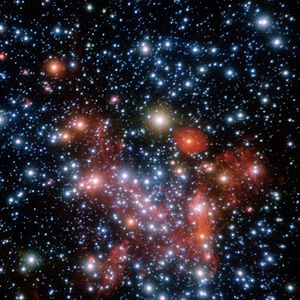 The nuclear star cluster of our own Milky Way Galaxy seen with adaptive optics in the infrared with the NaCo instrument on the VLT.

NSCs are the central massive objects of fainter, lower-mass galaxies where supermassive black holes are not present or are of ineligible mass. In the most massive galaxies, nuclear star clusters are entirely absent. Some galaxies, including the Milky Way, are known to contain both a nuclear star cluster and a supermassive black hole of comparable mass.[2]

Retrieved from "https://thesciencearchives.miraheze.org/w/index.php?title=Nuclear_star_cluster&oldid=6781"
Category:
Cookies help us deliver our services. By using our services, you agree to our use of cookies.