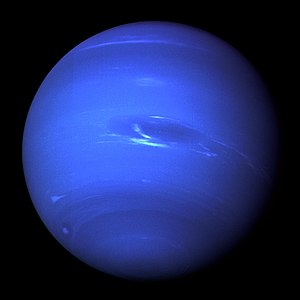 This picture of Neptune was produced from the last whole planet images taken through the green and orange filters on the Voyager 2 narrow angle camera. The images were taken at a range of 4.4 million miles from the planet, 4 days and 20 hours before closest approach in August 1989.The picture shows the Great Dark Spot and its companion bright smudge; on the west limb the fast moving bright feature called Scooter and the little dark spot are visible. These clouds were seen to persist for as long as Voyager's cameras could resolve them. North of these, a bright cloud band similar to the south polar streak may be seen.

Neptune, third most massive planet of the solar system and the eighth and outermost planet from the Sun. Because of its great distance from Earth, it cannot be seen with the unaided eye. With a small telescope, it appears as a tiny, faint blue-green disk. It is designated by the symbol ♆. It was discovered in 1846 by French mathematician Urbain Le Verrier and German and British astronomers Johann Galle and John Couch Adams through mathematical calculations derived from perturbations in the orbit of Uranus.

Neptune is well-known to have winds within its atmosphere that exceed speeds of 300 kilometers per hour. One such white cloud was named "Scooter".

Neptune is named for the Roman god of the sea, who is identified with the Greek deity Poseidon, a son of the Titan Cronus (the Roman god Saturn) and a brother of Zeus (the Roman god Jupiter). It is the second planet to have been found by means of a telescope. Its discovery in 1846 was a remarkable combination of the application of solid Newtonian physics and a belief in a numerological scheme that later proved to be scientifically unfounded (see below Neptune’s discovery). Neptune’s orbit is almost perfectly circular; as a result, its distance from the Sun varies comparatively little over its nearly 164-year period of revolution. Although the dwarf planet Pluto’s mean distance from the Sun is greater than Neptune’s, its orbit is so eccentric(elongated) that for about 20 years of each revolution Pluto is actually nearer the Sun than is Neptune.

Neptune is almost four times the diameter of Earth and around 50 times its volume but slightly smaller than Uranus, which makes it the smallest in diameter of the four (or five) giants, or Jovian, planets. It is more massive than Uranus, however, having a density roughly 25 percent higher. Neptune is the densest of the outer planets with an average density of 1.64 grams per cubic centimeter. Like the other giant planets, Neptune consists primarily of hydrogen, helium, water, and other volatile compounds, along with rocky material, and it has no solid surface. It receives less than half as much sunlight as Uranus, but heat escaping from its interior makes Neptune slightly warmer than Uranus. The heat liberated may also be responsible for the storminess in Neptune’s atmosphere, which exhibits the fastest winds seen on any planet in the solar system.

Neptune has 14 moons (natural satellites), only two of which had been discovered before the Voyager 2 spacecraft flew past the planet in 1989, and a system of rings, which had been unconfirmed until Voyager’s visit. As is the case for Uranus, most of what astronomers know about Neptune, including its rotation period and the existence and characteristics of its magnetic field and magnetosphere, was learned from a single spacecraft encounter. In recent years new knowledge of the Neptunian system has come as a result of advances in Earth-based observational technology.

Nereid has a prograde but eccentric orbit like a comet, implying that it might be captured, while Triton has a circular but tilted and retrograde orbit, implying that it might have been a former heliocentric planet or Kuiper Belt object that was captured by Neptune's gravity. Additionally, Triton's capture by Neptune would have caused massive gravitational disturbances between the moons and their orbits and having caused collisions between them. Triton is also suspected to have collided with another satellite in the past and Proteus is believed to have formed from accretion out of the rubble produced by Triton's capture.

The source of this page is the topic's corresponding article at Encyclopædia Britannica. You can visit the original article here.
No copyright infringement intended.

Retrieved from "https://thesciencearchives.miraheze.org/w/index.php?title=Neptune&oldid=15221"
Categories:
Cookies help us deliver our services. By using our services, you agree to our use of cookies.