The Moon (Latin: «luna») is Earth's satellite, and we usually see it in the night sky. Other planets also have moons or «natural satellites». Our moon is about a quarter the size of the Earth. Because it is far away it looks small, about half a degree wide. The gravity on the moon is one-sixth of the Earth's gravity. It means that something will be six times lighter on the Moon than on Earth. The Moon is a rocky and dusty place. The Moon drifts away from Earth at the rate of four centimeters each year, and it has a diameter of 3,474.2 kilometers. 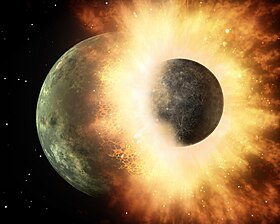 NASA's Spitzer Space Telescope found evidence of a collision between two planets orbiting a young star. Such an impact to the Earth would have created the Moon.

The Moon was created when a protoplanet with a radius of ~3,000 kilometers smashed into the Earth. The debris created joined together to form the Moon. The impactor is almost always referred to as Theia after the Greek goddess that give birth to the moon goddess Selene.[1]

In 2018, it was found using molybdenum isotope dating that Theia originated in the outer Solar System (rich in water and also the origin for carbonaceous asteroids and comets) rather in the inner Solar System, and that Earth's water originated on Theia.[2]

The theory is still widely accepted in the scientific community, but it still has cons.[3] For example, it does not explain how the Moon lost part of its composition of volatile elements and why Venus; which experienced giant collisions during its formation, does not host a similar moon.

The Moon being round, half of it is lit up by the sun. As it goes orbits the Earth, sometimes the side that people on Earth can see is all lit brightly. Other times only a small part of the side we see is lit. This is because the Moon does not send out its own light. People only see the parts that are being lit by sunlight. These different stages are called the Phases of the Moon.

It takes the Moon about 29.5 days to complete the cycle, from big and bright to small and dim and back to big and bright. The phase when the Moon passes between the Earth and Sun is called the new moon. The next phase of the moon is called the waxing crescent, followed by the first quarter, waxing gibbous, then to a full moon. A full Moon occurs when the moon and sun are on opposite sides of the Earth. As the Moon continues its orbit it becomes a waning gibbous, third quarter, waning crescent, and finally back to a new moon. People used the moon to measure time. A month is approximately equal in time to a lunar cycle.

The moon always shows the same side to Earth. Astronomers call this phenomenon tidal locking. This means that half of it can never be seen from Earth. The side facing away from Earth is called the far side or dark side of the Moon, and even though the sun does shine on it, we just never see it lit.

The Moon has a density of 3.34 grams per cubic centimeter, which is much less than those of the terrestrial planets, even Mars. It was also believed, at a time, to lack an iron inner core of its own. While this is simply due to the Moon consisting of material from the proto-Earth's mantle blasted into space following the collision with Theia (without matter from Theia itself), this led to pseudoscientific speculation that the Moon is hollow or even an abandoned spacecraft, either captured by Earth or engineered to purposely produce life, including humans.

Two notable instances of the concept of the Moon being a spacecraft are David Weber's books Mutineer's Moon and The Armageddon Inheritance, in which the Moon is an old alien spaceship named Dahak, and the British 1975 television series Space: 1999, where the Moon is blasted off its orbit into outer space due to a thermonuclear explosion, stranding personnel on the fictional scientific base Moonbase Alpha, in the Plato crater.

Retrieved from "https://thesciencearchives.miraheze.org/w/index.php?title=Moon&oldid=15208"
Categories:
Cookies help us deliver our services. By using our services, you agree to our use of cookies.