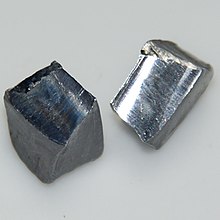 Lead is a chemical element with atomic symbol Pb and atomic number 82. Lead is a soft and malleable poor metal, also considered to be one of the heavy metals. Lead tarnishes to a dull grayish color when exposed to air. It has a shiny chrome-silver luster when melted into a liquid. Lead may also be used in construction, wea5

pons, and is commonly mistaken for graphite when people use the term pencil lead, although in ancient times lead was commonly used. Its high density makes it fit for many applications like radiation shielding, ammunition (now losing out to uranium and tungsten), etc.

Lead is incredibly poisonous to humans, but it was used for everything although it's density can actually block receptors for glutamate, the important neurotransmitter involved in learning, and lead poisoning in children can cause the loss of developmental skills in young children, and it is incredibly common, and it is an unreactive post-transition metal and it tends to form covalent bonds, and it is easily extracted, and the ore Galena, was known to contain silver which lead to widespread use, and it declined after The Romans fell, and it did not reach the same levels as it was in the past until the Industrial Revolution, and recently, 10 million tonnes of lead was mined for ore. Lead's low melting point, ductility and relative inertness to oxidation made it useful in construction, plumbing, bullets, and weights, along with being an additive to gasoline, but it's toxicity eventually was recognized, and it was phased out of many applications, it is a neurotoxin that accumulates in soft tissues and bones, and damages the nervous system in the human body, and even cause blood disorders. It's toxicity is responsible for it's banning in federal law in 1978 for being extremely poisonous. Legal environment regulations eliminated or even banned the use of lead in non-battery products, including gasoline, paints, solders, and water systems, and it is still used in coal-fired power plants to capture lead emissions, and the use of lead was banned in sport shooting in The Netherlands.

Retrieved from "https://thesciencearchives.miraheze.org/w/index.php?title=Lead&oldid=11857"
Category:
Cookies help us deliver our services. By using our services, you agree to our use of cookies.