Italy, official name Repubblica Italiana, is a republican country in southern Europe and a member of the European Union.[1] Its President is Sergio Mattarella and its Prime Minister is Giuseppe Conte. It borders

France to the west. The capital of Italy is Rome. 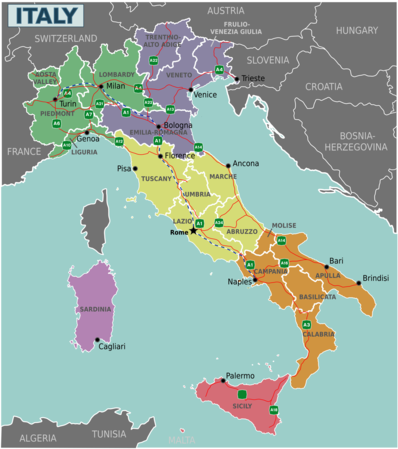 Before 1861, Italy was made up of smaller kingdoms and city-states. Italy has become famous for its wine, as well as its food; among the most famous dishes include various types of pasta, pizza, and grapes. Olives are also incredibly common in dishes.

Retrieved from "https://thesciencearchives.miraheze.org/w/index.php?title=Italy&oldid=13610"
Categories:
Cookies help us deliver our services. By using our services, you agree to our use of cookies.