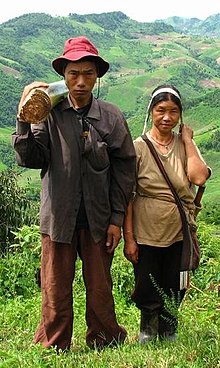 A man and a woman in Thailand. Credit to Hartmanga

A human (informally called a human being or person) is a member of the species Homo sapiens, which translates to «wise man» in Latin. Carolus Linnaeus put humans in the mammalian order of primates. [1]

Humans are very social and care for each other; they are also the only species living today known to build fires, to cook their food and wear clothes. Humans use more technology than any other animal on Earth ever has. Humans like things that are beautiful and like to make art, literature and music. Humans use education and teaching to pass on skills, ideas and customs to the next generations.

Humans have a long period of development before and after birth. Their life depends less on instincts than other animals, and more on learning. Humans are also born with their brains not so well developed like those of other mammals. This causes an unusually long childhood, and this is what makes family life important. If human brains were better developed they would be larger, and this would make birth more difficult. In birth, the baby's head has to get through the vagina, a passageway through the mother's pelvis.

Many animals use signs and sounds to communicate with each other; humans have the complex language system. It allows them to express ideas by using words, thus humans are capable of making abstract ideas and communicating them to others. Human languages can express things that are not present, or talk about events that are not happening at the time;[2] those things might be elsewhere, and the events may also have occurred at another place or time. No other animals have a system of communication that is as elaborate as human language. By using words to communicate with each other, humans make complex communities with laws, traditions and customs. Humans like to understand the world around them. They try to explain things through myth, science and philosophy; wanting to understand things has helped many humans make important discoveries.

Retrieved from "https://thesciencearchives.miraheze.org/w/index.php?title=Humans&oldid=2297"
Categories:
Cookies help us deliver our services. By using our services, you agree to our use of cookies.