From the Science Archives, the open-project database of science information that barely anyone can edit
Jump to navigation Jump to search
‹ The template Planetbox begin is being considered for deletion. ›

HD 209458 b, also given the nickname Osiris,[3] is an exoplanet that orbits the solar analog HD 209458 in the constellation Pegasus, some 159 light-years from the Solar System. The radius of the planet's orbit is 7 million kilometres, about 0.047 astronomical units, or one eighth the radius of Mercury's orbit. This small radius results in a year that is 3.5 Earth days long and an estimated surface temperature of about 1,000 °C (about 1,800 °F). Its mass is 220 times that of Earth (0.69 Jupiter masses) and its volume is some 2.5 times greater than that of Jupiter. The high mass and volume of HD 209458 b indicate that it is a gas giant.

HD 209458 b represents a number of milestones in extraplanetary research. It was the first of many categories:

Based on the application of new, theoretical models, as of April 2007, it is alleged to be the first extrasolar planet found to have water vapor in its atmosphere.[5][6][7][8]

Spectroscopic studies first revealed the presence of a planet around HD 209458 on November 5, 1999. Astronomers had made careful photometric measurements of several stars known to be orbited by planets, in the hope that they might observe a dip in brightness caused by the transit of the planet across the star's face. This would require the planet's orbit to be inclined such that it would pass between the Earth and the star, and previously no transits had been detected.

Soon after the discovery, separate teams, one led by David Charbonneau including Timothy Brown and others, and the other by Gregory W. Henry, were able to detect a transit of the planet across the surface of the star making it the first known transiting extrasolar planet. On September 9 and 16, 1999, Charbonneau's team measured a 1.7% drop in HD 209458's brightness, which was attributed to the passage of the planet across the star. On November 8, Henry's team observed a partial transit, seeing only the ingress.[10] Initially unsure of their results, the Henry group decided to rush their results to publication after overhearing rumors that Charbonneau had successfully seen an entire transit in September. Papers from both teams were published simultaneously in the same issue of the Astrophysical Journal. Each transit lasts about three hours, during which the planet covers about 1.5% of the star's face.

The star had been observed many times by the Hipparcos satellite, which allowed astronomers to calculate the orbital period of HD 209458 b very accurately at 3.524736 days.[11]

Spectroscopic analysis had shown that the planet had a mass about 0.69 times that of Jupiter.[12] The occurrence of transits allowed astronomers to calculate the planet's radius, which had not been possible for any previously known exoplanet, and it turned out to have a radius some 35% larger than Jupiter's.

On March 22, 2005, NASA released news that infrared light from the planet had been measured by the Spitzer Space Telescope, the first ever direct detection of light from an extrasolar planet. This was done by subtracting the parent star's constant light and noting the difference as the planet transited in front of the star and was eclipsed behind it, providing a measure of the light from the planet itself. New measurements from this observation determined the planet's temperature as at least 750 °C (1300 °F). The circular orbit of HD 209458 b was also confirmed.

On February 21, 2007, NASA and Nature released news that HD 209458 b was one of the first two extrasolar planets to have their spectra directly observed, the other one being HD 189733 b.[13][14] This was long seen as the first mechanism by which extrasolar but non-sentient life forms could be searched for, by way of influence on a planet's atmosphere. A group of investigators led by Jeremy Richardson of NASA's Goddard Space Flight Center spectrally measured HD 209458 b's atmosphere in the range of 7.5 to 13.2 micrometres. The results defied theoretical expectations in several ways. The spectrum had been predicted to have a peak at 10 micrometres which would have indicated water vapor in the atmosphere, but such a peak was absent, indicating no detectable water vapor. Another unpredicted peak was observed at 9.65 micrometres, which the investigators attributed to clouds of silicate dust, a phenomenon not previously observed. Another unpredicted peak occurred at 7.78 micrometres, for which the investigators did not have an explanation. A separate team led by Mark Swain of the Jet Propulsion Laboratory reanalyzed the Richardson et al. data, and had not yet published their results when the Richardson et al. article came out, but made similar findings.

On 23 June 2010, astronomers announced they have measured a superstorm (with windspeeds of up to 7000 km/h) for the first time in the atmosphere of HD 209458 b.[15] The very high-precision observations done by ESO’s Very Large Telescope and its powerful CRIRES spectrograph of carbon monoxide gas show that it is streaming at enormous speed from the extremely hot day side to the cooler night side of the planet. The observations also allow another exciting "first"—measuring the orbital speed of the exoplanet itself, providing a direct determination of its mass.[4]

It had been previously hypothesized that hot Jupiters particularly close to their parent star should exhibit this kind[clarification needed] of inflation due to intense heating of their outer atmosphere. Tidal heating due to its orbit's eccentricity, which may have been more eccentric at formation, may also have played a role over the past billion years.[18]

The atmosphere is at a pressure of one bar at an altitude of 1.29 Jupiter radii above the planet's center.[19]

Where the pressure is 33±5 millibars, the atmosphere is clear (probably hydrogen) and its Rayleigh effect is detectable. At that pressure the temperature is 2200±260 K.[19]

Observations by the orbiting Microvariability and Oscillations of STars telescope initially limited the planet's albedo (or reflectivity) below 0.3, making it a surprisingly dark object. (The geometric albedo has since been measured to be 0.038 ± 0.045.[20]) In comparison, Jupiter has a much higher albedo of 0.52. This would suggest that HD 209458 b's upper cloud deck is either made of less reflective material than is Jupiter's, or else has no clouds and Rayleigh-scatters incoming radiation like Earth's dark ocean.[21] Models since then have shown that between the top of its atmosphere and the hot, high pressure gas surrounding the mantle, there exists a stratosphere of cooler gas.[22][23] This implies an outer shell of dark, opaque, hot cloud; usually thought to consist of vanadium and titanium oxides like red dwarfs ("pM planets"), but other compounds like tholins cannot be ruled out yet.[23] A 2016 study indicates the high-altitude cloud cover is patchy with about 57 per cent coverage [24]. The Rayleigh-scattering heated hydrogen rests at the top of the stratosphere; the absorptive portion of the cloud deck floats above it at 25 millibars.[25]

Surrounding that level, on November 27, 2001, the Hubble Space Telescope detected sodium, the first planetary atmosphere outside the Solar System to be measured.[26] This detection was predicted by Sara Seager in late 2001.[27] The core of the sodium line runs from pressures of 50 millibar to a microbar.[28] This turns out to be about a third the amount of sodium at HD 189733 b.[29]

In 2003–4, astronomers used the Hubble Space Telescope Imaging Spectrograph to discover an enormous ellipsoidal envelope of hydrogen, carbon and oxygen around the planet that reaches 10,000 K. The hydrogen exosphere extends to a distance RH=3.1 RJ, much larger than the planetary radius of 1.32 RJ.[30] At this temperature and distance, the Maxwell–Boltzmann distribution of particle velocities gives rise to a significant 'tail' of atoms moving at speeds greater than the escape velocity. The planet is estimated to be losing about 100–500 million (1–5×108) kg of hydrogen per second. Analysis of the starlight passing through the envelope shows that the heavier carbon and oxygen atoms are being blown from the planet by the extreme "hydrodynamic drag" created by its evaporating hydrogen atmosphere. The hydrogen tail streaming from the planet is approximately 200,000 kilometres long, which is roughly equivalent to its diameter.

It is thought that this type of atmosphere loss may be common to all planets orbiting Sun-like stars closer than around 0.1 AU. HD 209458 b will not evaporate entirely, although it may have lost up to about 7% of its mass over its estimated lifetime of 5 billion years.[31] It may be possible that the planet's magnetic field may prevent this loss, because the exosphere would become ionized by the star, and the magnetic field would contain the ions from loss.[32]

On April 10, 2007, Travis Barman of the Lowell Observatory announced evidence that the atmosphere of HD 209458 b contained water vapor. Using a combination of previously published Hubble Space Telescope measurements and new theoretical models, Barman found strong evidence for water absorption in the planet's atmosphere.[5][33][34] His method modeled light passing directly through the atmosphere from the planet's star as the planet passed in front of it. However, this hypothesis is still being investigated for confirmation.

Barman drew on data and measurements taken by Heather Knutson, a student at Harvard University, from the Hubble Space Telescope, and applied new theoretical models to demonstrate the likelihood of water absorption in the atmosphere of the planet. The planet orbits its parent star every three and a half days, and each time it passes in front of its parent star, the atmospheric contents can be analyzed by examining how the atmosphere absorbs light passing from the star directly through the atmosphere in the direction of Earth.

According to a summary of the research, atmospheric water absorption in such an exoplanet renders it larger in appearance across one part of the infrared spectrum, compared to wavelengths in the visible spectrum. Barman took Knutson's Hubble data on HD 209458 b, applied to his theoretical model, and allegedly identified water absorption in the planet's atmosphere.

On April 24, the astronomer David Charbonneau, who led the team that made the Hubble observations, cautioned that the telescope itself may have introduced variations that caused the theoretical model to suggest the presence of water. He hoped that further observations would clear the matter up in the following months.[35] As of April 2007, further investigation is being conducted.

On October 20, 2009, researchers at JPL announced the discovery of water vapor, carbon dioxide, and methane in the atmosphere.[36][37] 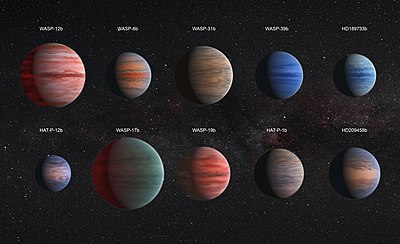 Retrieved from "https://thesciencearchives.miraheze.org/w/index.php?title=HD_209458_b&oldid=13589"
Categories:
Cookies help us deliver our services. By using our services, you agree to our use of cookies.