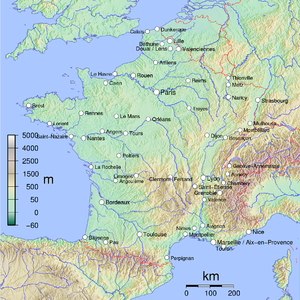 France is a republican country in Europe. It is the second largest country entirely within Europe in terms of both population and land area. France borders

Germany to the northeast,

Spain to the south, and

Italy to the southeast. The capital of France is Paris and the current president is Emmanuel Macron.

France is separated from Spain by the Pyrenees mountains and from Germany by the Rhine river. Major rivers in France include the Loire, Rhone, and Seine, which flows through Paris. France lies between the Mediterranean Sea and Atlantic Ocean. Just accross from the English Channel is the

Famous scientists from France include:

France is the largest contributor to the European Space Agency (ESA).[1]