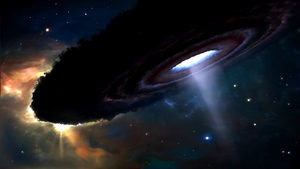 The ε Aurigae system during an eclipse (artist's impression).

Epsilon (ε) Aurigae, also called Maaz or Almaaz, is a yellow supergiant star (stellar classification F0 Iab and a diameter of 143 to 358 D☉)[1][2] forming part of the Auriga constellation. It is 37,875 times more luminous than the Sun.[3] It is orbited by a binary star (two main-sequence stars of diameter 3.9 D☉[4] both having a spectral class of B) which is surrounded by a thick dusk cloud.[5][6] The dust cloud only creates infrared light. The dust cloud was originally thought to be the largest star known, before it was later revealed to not be a star. The largest star was later found to be VY Canis Majoris. Another hypothesis by astronomers A. G. W. Cameron and R. Stothers states that the companion of Epsilon Aurigae A is a black hole, consuming solid particles from the dusk cloud that bypass its event horizon which sends out the infrared light detected from Earth. This hypothesis has since been regarded obsolete and discarded.[7]

Retrieved from "https://thesciencearchives.miraheze.org/w/index.php?title=Epsilon_Aurigae&oldid=10017"
Categories:
Cookies help us deliver our services. By using our services, you agree to our use of cookies.