listen)), is a landlocked country in Central Europe bordered by

Germany to the west,

Austria to the south,

Slovakia to the east and

Poland to the northeast.[12] The Czech Republic covers an area of 78,866 square kilometres (30,450 sq mi) with a mostly temperate continental climate and oceanic climate. It is a unitary parliamentary republic; its capital and largest city is Prague, with 1.3 million residents. Other major cities are Brno, Ostrava and Pilsen. The Czech Republic is a member of the European Union (EU), NATO, the OECD, the United Nations, the OSCE, and the Council of Europe.

It is a developed country[13] with an advanced,[14] high income[15] export-oriented social market economy based in services, manufacturing and innovation. The UNDP ranks the country 14th in inequality-adjusted human development.[16] The Czech Republic is a welfare state with a "continental" European social model, a universal health care system, tuition-free university education an is ranked 14th in the Human Capital Index.[17] It ranks as the 6th safest or most peaceful country and is one of the most non-religious countries in the world,[18] while achieving strong performance in democratic governance.

The Czech Republic includes the historical territories of Bohemia,[19] Moravia, and Czech Silesia. The Czech state was formed in the late 9th century as the Duchy of Bohemia under the Great Moravian Empire. After the fall of the Empire in 907, the centre of power transferred from Moravia to Bohemia under the Přemyslid dynasty. In 1002, the duchy was formally recognized as part of the Holy Roman Empire,[20][21] becoming the Kingdom of Bohemia in 1198 and reaching its greatest territorial extent in the 14th century. Besides Bohemia itself, the king of Bohemia ruled the lands of the Bohemian Crown, he had a vote in the election of the Holy Roman Emperor, and Prague was the imperial seat in periods between the 14th and 17th century. In the Hussite Wars of the 15th century driven by the Protestant Bohemian Reformation, the kingdom faced economic embargoes and defeated five consecutive crusades proclaimed by the leaders of the Catholic Church. 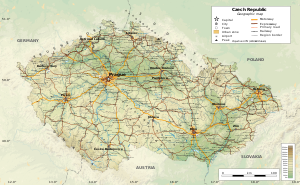 The Czech landscape is exceedingly varied. Bohemia, to the west, consists of a basin drained by the Elbe (Template:Lang-cs) and the Vltava rivers, surrounded by mostly low mountains, such as the Krkonoše range of the Sudetes. The highest point in the country, Sněžka at 1,603 m (5,259 ft), is located here. Moravia, the eastern part of the country, is also quite hilly. It is drained mainly by the Morava River, but it also contains the source of the Oder River (Template:Lang-cs).

Water from the landlocked Czech Republic flows to three different seas: the North Sea, Baltic Sea and Black Sea. The Czech Republic also leases the Moldauhafen, a 30,000-square-metre (7.4-acre) lot in the middle of the Hamburg Docks, which was awarded to Czechoslovakia by Article 363 of the Treaty of Versailles, to allow the landlocked country a place where goods transported down river could be transferred to seagoing ships. The territory reverts to Germany in 2028.

Phytogeographically, the Czech Republic belongs to the Central European province of the Circumboreal Region, within the Boreal Kingdom. According to the World Wide Fund for Nature, the territory of the Czech Republic can be subdivided into four ecoregions: the Western European broadleaf forests, Central European mixed forests, Pannonian mixed forests, and Carpathian montane conifer forests.

The three historical lands of the Czech Republic (formerly the core countries of the Bohemian Crown) correspond almost perfectly with the river basins of the Elbe (Template:Lang-cs) and the Vltava basin for Bohemia, the Morava one for Moravia, and the Oder river basin for Czech Silesia (in terms of the Czech territory).

The Czech Republic mostly has a temperate oceanic climate, with warm summers and cold, cloudy and snowy winters. The temperature difference between summer and winter is relatively high, due to the landlocked geographical position.[22]

Within the Czech Republic, temperatures vary greatly, depending on the elevation. In general, at higher altitudes, the temperatures decrease and precipitation increases. The wettest area in the Czech Republic is found around Bílý Potok in Jizera Mountains and the driest region is the Louny District to the northwest of Prague. Another important factor is the distribution of the mountains; therefore, the climate is quite varied.

The coldest month is usually January, followed by February and December. During these months, there is usually snow in the mountains and sometimes in the major cities and lowlands. During March, April and May, the temperature usually increases rapidly, especially during April, when the temperature and weather tends to vary widely during the day. Spring is also characterized by high water levels in the rivers, due to melting snow with occasional flooding.

The warmest month of the year is July, followed by August and June. On average, summer temperatures are about 20 °C (36 °F) – 30 °C (54 °F) higher than during winter. Summer is also characterized by rain and storms.

Most rain falls during the summer. Sporadic rainfall is relatively constant throughout the year (in Prague, the average number of days per month experiencing at least 0.1 mm of rain varies from 12 in September and October to 16 in November) but concentrated heavy rainfall (days with more than 10 mm per day) are more frequent in the months of May to August (average around two such days per month).[24]

The Czech lands have a long and rich scientific tradition. The research based on cooperation between universities, Academy of Sciences and specialised research centers brings new inventions and impulses in this area. Important inventions include the modern contact lens, the separation of modern blood types, and the production of Semtex plastic explosive.

Famous scientists who were born on the territory of the current Czech Republic:

A number of other scientists are also connected in some way with the Czech lands. The following taught at the University of Prague: astronomers Johannes Kepler and Tycho Brahe, physicists Christian Doppler, Nikola Tesla, and Albert Einstein, and geologist Joachim Barrande. 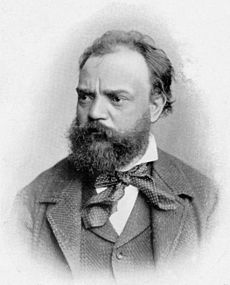 Bedřich Smetana on the painting of František Dvořák
Main articles: Music of the Czech Lands and Moravian traditional music

The musical tradition of the Czech lands arose from first church hymns, whose first evidence is suggested at the break of 10th and 11th century. The first significant pieces of Czech music include two chorales, which in their time performed the function of anthems: "Hospodine pomiluj ny" (Lord, Have Mercy on Us) from around 1050, unmistakably the oldest and most faithfully preserved popular spiritual song to have survived to the present, and the hymn "Svatý Václave" (Saint Wenceslas) or "Saint Wenceslas Chorale" from around 1250.[31] Its roots can be found in the 12th century and it still belongs to the most popular religious songs to this day. In 1918, in the beginning of the Czechoslovak state, the song was discussed as one of the possible choices for the national anthem. The authorship of the anthem "Lord, Have Mercy on Us" is ascribed by some historians to Saint Adalbert of Prague (sv.Vojtěch), bishop of Prague, living between 956 and 997.[32]

Czech music can be considered to have been beneficial in both the European and worldwide context, several times co-determined or even determined a newly arriving era in musical art,[33] above all of Classical era, as well as by original attitudes in Baroque, Romantic and modern classical music. The most famous Czech musical works are Smetana’s The Bartered Bride and Má vlast, Dvořák’s New World Symphony, Rusalka and Slavonic Dances or Janáček’s Sinfonietta and operas, above all Jenůfa.

The most famous music festival in the country is Prague Spring International Music Festival of classical music, a permanent showcase for outstanding performing artists, symphony orchestras and chamber music ensembles of the world.

Retrieved from "https://thesciencearchives.miraheze.org/w/index.php?title=Czech_Republic&oldid=13704"
Categories:
Cookies help us deliver our services. By using our services, you agree to our use of cookies.