From the Science Archives, the open-project database of science information that barely anyone can edit
(Redirected from Cepheus)
Jump to navigation Jump to search

Cepheus is a constellation in the northern sky, which is named after Cepheus (a King in the Greek mythology).

The constellation's brightest star is Alpha Cephei, with an apparent magnitude of 2.5. Delta Cephei is the prototype of an important class of star known as a Cepheid variable. RW Cephei, an orange hypergiant, together with the red supergiants Mu Cephei, MY Cephei, VV Cephei, and V354 Cephei are among the largest stars known. In addition, Cepheus also has the hyperluminous quasar S5 0014+81, which hosts an ultramassive black hole in its core, reported at 40 billion solar masses, about 10,000 times more massive than the central black hole of the Milky Way, making this among the most massive black holes currently known.[1][2]

Cepheus was the King of Aethiopia. He was married to Cassiopeia and was the father of Andromeda, both of whom are immortalized as modern day constellations along with Cepheus.[3]

Alpha Cephei, also known as Alderamin, is the brightest star in the constellation, with an apparent magnitude of 2.51.

Delta Cephei is the prototype Cepheid variable, a yellow-hued supergiant star 980 light-years from Earth. It was discovered to be variable by John Goodricke in 1784. It varies between 3.5m and 4.4m over a period of 5 days and 9 hours. The Cepheids are a class of pulsating variable stars; Delta Cephei has a minimum size of 40 solar diameters and a maximum size of 46 solar diameters. It is also a double star; the yellow star also has a wide-set blue-hued companion of magnitude 6.3.[4]

Kruger 60 is an 11th-magnitude binary star consisting of two red dwarfs. The star system is one of the nearest, being only 13 light-years away from Earth. 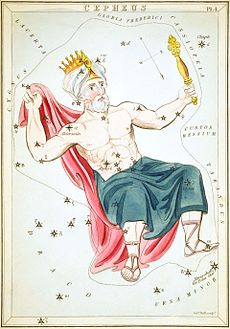 Cepheus as depicted in Urania's Mirror, a set of constellation cards published in London, Template:C.

Cepheus is most commonly depicted as holding his arms aloft, praying for the deities to spare the life of Andromeda. He also is depicted as a more regal monarch sitting on his throne.[3]

Retrieved from "https://thesciencearchives.miraheze.org/w/index.php?title=Cepheus_(constellation)&oldid=13421"
Categories:
Cookies help us deliver our services. By using our services, you agree to our use of cookies.