From the Science Archives, the open-project database of science information that barely anyone can edit
(Redirected from Blue supergiant)
Jump to navigation Jump to search

Blue supergiant stars are hot luminous stars, referred to scientifically as OB supergiants. They have luminosity class I and spectral class B9 or earlier.[1]

Blue supergiants (BSGs) are found towards the top left of the Hertzsprung–Russell diagram to the right of the main sequence. They are larger than the Sun but smaller than a red supergiant, with surface temperatures of 10,000–50,000 K and luminosities from about 10,000 to a million times the Sun. 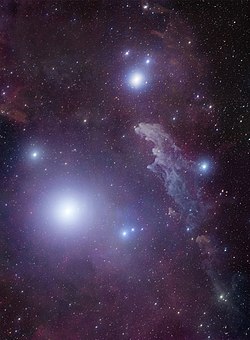 Rigel and the IC 2118 nebula which it illuminates.

Supergiants are evolved high-mass stars, larger and more luminous than main-sequence stars. O class and early B class stars with initial masses around 10-300 M☉ evolve away from the main sequence in just a few million years as their hydrogen is consumed and heavy elements start to appear near the surface of the star. These stars usually become blue supergiants, although it is possible that some of them evolve directly to Wolf–Rayet stars.[2] Expansion into the supergiant stage occurs when hydrogen in the core of the star is depleted and hydrogen shell burning starts, but it may also be caused as heavy elements are dredged up to the surface by convection and mass loss due to radiation pressure increase.[3]

Blue supergiants are newly evolved from the main sequence, have extremely high luminosities, high mass loss rates, and are generally unstable. Many of them become luminous blue variables (LBVs) with episodes of extreme mass loss. Lower mass blue supergiants continue to expand until they become red supergiants. In the process they must spend some time as yellow supergiants or yellow hypergiants, but this expansion occurs in just a few thousand years and so these stars are rare. Higher mass red supergiants blow away their outer atmospheres and evolve back to blue supergiants, and possibly onwards to Wolf–Rayet stars.[4][5] Depending on the exact mass and composition of a red supergiant, it can execute a number of blue loops before either exploding as a type II supernova or finally dumping enough of its outer layers to become a blue supergiant again, less luminous than the first time but more unstable.[6] If such a star can pass through the yellow evolutionary void it is expected that it becomes one of the lower luminosity LBVs.[7]

Supernova progenitors are most commonly red supergiants and it was believed that only red supergiants could explode as supernovae. SN 1987A, however, forced astronomers to re-examine this theory, as its progenitor, Sanduleak -69° 202, was a B3 blue supergiant.[8] Now it is known from observation that almost any class of evolved high-mass star, including blue and yellow supergiants, can explode as a supernova although theory still struggles to explain how in detail.[9] While most supernovae are of the relatively homogeneous type II-P and are produced by red supergiants, blue supergiants are observed to produce supernovae with a wide range of luminosities, durations, and spectral types, sometimes sub-luminous like SN 1987A, sometimes super-luminous such as many type IIn supernovae.[10][11][12]

Spectrum of a B2 star.

Because of their extreme masses they have relatively short lifespans and are mainly observed in young cosmic structures such as open clusters, the arms of spiral galaxies, and in irregular galaxies. They are rarely observed in spiral galaxy cores, elliptical galaxies, or globular clusters, most of which are believed to be composed of older stars, although the core of the Milky Way has recently been found to be home to several massive open clusters and associated young hot stars.[13]

The best known example is Rigel, the brightest star in the constellation of Orion. Its mass is about 20 times that of the Sun, and its luminosity is around 117,000 times greater. Despite their rarity and their short lives they are heavily represented among the stars visible to the naked eye; their immense brightness is more than enough to compensate for their scarcity.

Blue supergiants have fast stellar winds and the most luminous, called hypergiants, have spectra dominated by emission lines that indicate strong continuum driven mass loss. Blue supergiants show varying quantities of heavy elements in their spectra, depending on their age and the efficiency with which the products of nucleosynthesis in the core are convected up to the surface. Quickly rotating supergiants can be highly mixed and show high proportions of helium and even heavier elements while still burning hydrogen at the core; these stars show spectra very similar to a Wolf Rayet star.

Retrieved from "https://thesciencearchives.miraheze.org/w/index.php?title=Blue_supergiant_star&oldid=14860"
Categories:
Cookies help us deliver our services. By using our services, you agree to our use of cookies.