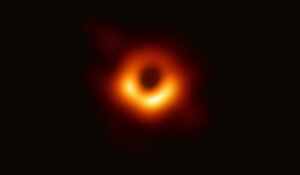 The Event Horizon Telescope (EHT) — a planet-scale array of eight ground-based radio telescopes forged through international collaboration — was designed to capture images of a black hole. In coordinated press conferences across the globe, EHT researchers revealed that they succeeded, unveiling the first direct visual evidence of the supermassive black hole in the centre of Messier 87 and its shadow.

Artist's impression of a black hole

A black hole is a region of space from which nothing, including light, can escape. According to the general theory of relativity, it is the result of the curving of spacetime caused by a very dense mass. Black Holes were once the cores of very massive stars that were compressed into a fraction of its original size prior to the star exploding as a supernova or hypernova. Anything that is compressed to a size smaller than its Schwarzschild radius will become a black hole (e.g. the Sun compressed to the size of a city). The Schwarzschild radius depends on the object's mass. The «actual boundary» of a black hole is called the event horizon. Anything that passes the event horizon will be sucked into the black hole, never to return.

Retrieved from "https://thesciencearchives.miraheze.org/w/index.php?title=Black_Hole&oldid=14722"
Categories:
Cookies help us deliver our services. By using our services, you agree to our use of cookies.