From the Science Archives, the open-project database of science information that barely anyone can edit
Jump to navigation Jump to search
For other uses, see Bellatrix (disambiguation). 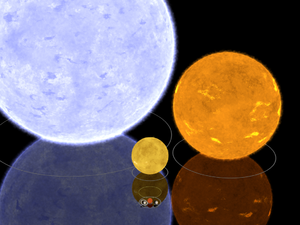 From left to right, the stars Bellatrix, the Sun, and Algol B

Bellatrix was once thought to belong to the Orion OB1 Association of stars that share a common motion through space, along with the "Orion's Belt" stars Zeta Orionis (Alnitak), Epsilon Orionis (Alnilam), and Delta Orionis (Mintaka). However, this is no longer believed to be the case, as Bellatrix is now known to be much closer than the rest of the group.[12] It is not known to have a stellar companion,[16] although researchers Maria-Fernanda Nieva and Norbert Przybilla raised the possibility it might be a spectroscopic binary.[17] A 2011 search for nearby companions failed to conclusively find any objects that share a proper motion with Bellatrix. Three nearby candidates were all found to be background stars.[18]

Bellatrix has been used as both a photometric and spectral standard star, but both characteristics have been shown to be unreliable.

In 1963, Bellatrix was included with a set of bright stars used to define the UBV magnitude system. These are used for comparison with other stars to check for variability, and so by definition, the apparent magnitude of Bellatrix was set to 1.64.[19] However, when an all-sky photometry survey was carried out in 1988, this star was itself found to be variable. It ranges in apparent magnitude from 1.59 to 1.64.[20]

The spectral types for O and early B stars were defined more rigorously in 1971 and Bellatrix was used as a standard for the B2 III type.[21] The expected brightness of Bellatrix from this spectral type is about one magnitude brighter than calculated from its apparent magnitude and Hipparcos distance.[22] Analysis of the observed characteristics of the star indicate that it should be a B2 main sequence star, not the giant that it appears from its spectral type.[23] Close analysis of high resolution spectra suggest that it is a spectroscopic binary composed of two similar stars less luminous than a B2 giant.[17]

Gamma Orionis is the star's Bayer designation. The traditional name Bellatrix is Latin for "female warrior"; it first appeared in the works of Abu Ma'shar al-Balkhi and Johannes Hispalensis, where it originally referred to Capella, but was transferred to Gamma Orionis by the Vienna school of astronomers in the 15th century, and appeared in contemporary reprints of the Alfonsine tables.[24] In 2016, the International Astronomical Union organized a Working Group on Star Names (WGSN)[25] to catalog and standardize proper names for stars. The WGSN's first bulletin of July 2016[26] included a table of the first two batches of names approved by the WGSN; which included Bellatrix for this star. It is now so entered in the IAU Catalog of Star Names.[27]

Bellatrix was also called the Amazon Star, which Richard Hinckley Allen proposed came from a loose translation of the Arabic name Al Najīd, the Conqueror.[10] A c.1275 Arabic celestial globe records the name as المرزم "the lion".[28] Bellatrix is one of the four navigational stars in Orion that are used for celestial navigation.[29]

In the 17th century catalogue of stars in the Calendarium of Al Achsasi al Mouakket, this star was designated Menkib al Jauza al Aisr, which was translated into Latin as Humerus Sinister Gigantis.[32]

The Wardaman people of northern Australia know Bellatrix as Banjan, the sparkling pigment used in ceremonies conducted by Rigel the Red Kangaroo Leader in a songline when Orion is high in the sky. The other stars of Orion are his ceremonial tools and entourage. Betelgeuse is Ya-jungin "Owl Eyes Flicking", watching the ceremonies.[33]

To the Inuit, the appearance of Betelgeuse and Bellatrix high in the southern sky after sunset marked the beginning of spring and lengthening days in late February and early March. The two stars were known as Akuttujuuk "those (two) placed far apart", referring to the distance between them, mainly to people from North Baffin Island and Melville Peninsula.[34]

Retrieved from "https://thesciencearchives.miraheze.org/w/index.php?title=Bellatrix&oldid=6355"
Categories:
Cookies help us deliver our services. By using our services, you agree to our use of cookies.