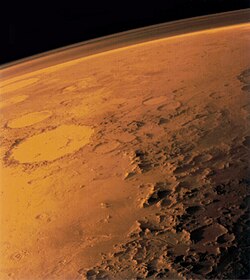 An atmosphere is a layer or a set of layers of gases surrounding or composing part of a planet or star that is held in place by the body's gravity. An atmosphere is more likely to be retained if the gravity it is subject to is high and atmosphere possesses a low temperature.

The layers of the Earth's atmosphere

The atmosphere extends hundreds of kilometers into space but 99 percent of its air is in the 80 km closest to Earth. The gases that make up the atmosphere are:

and many other trace gases such as helium, water vapor, neon, krypton, and hydrogen. The important greenhouse gas Carbon Dioxide comprises a tiny 0.04% of the air. The amount of water vapor varies, but is usually around 1%. The Earth's atmosphere is made out of four (or five) primary layers.

Mercury's atmosphere is so small, it cannot blow up a party balloon to full size. It furthermore consists of mainly sodium gas clouds. Due to Mercury's thin atmosphere, Mercury is extremely hot during the day, but without any air to trap the heat, Mercury's temperature drops to well below freezing at night.

Retrieved from "https://thesciencearchives.miraheze.org/w/index.php?title=Atmosphere&oldid=10253"
Categories:
Cookies help us deliver our services. By using our services, you agree to our use of cookies.