From the Science Archives, the open-project database of science information that barely anyone can edit
Jump to navigation Jump to search
For other uses, see Juno.

Juno, minor-planet designation 3 Juno in the Minor Planet Center catalogue system, is an asteroid in the asteroid belt. Juno was the third asteroid discovered, in 1804, by German astronomer Karl Harding. It is the 11th-largest asteroid, and one of the two largest stony (S-type) asteroids, along with 15 Eunomia. It is estimated to contain 1% of the total mass of the asteroid belt.[12]

Juno was discovered on 1 September 1804, by Karl Ludwig Harding.[2] It was the third asteroid found, but was initially considered to be a planet; it was reclassified as an asteroid and minor planet during the 1850s.[13]

Juno is named after the mythological Juno, the highest Roman goddess. The adjectival form is Junonian (jūnōnius).

Juno is one of the larger asteroids, perhaps tenth by size and containing approximately 1% the mass of the entire asteroid belt.[14] It is the second-most-massive S-type asteroid after 15 Eunomia.[4] Even so, Juno has only 3% the mass of Ceres.[4] 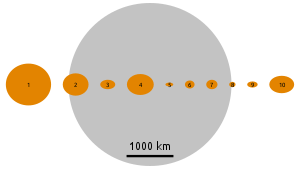 Size comparison: the first 10 asteroids discovered, profiled against Earth's Moon. Juno is third from the left.

Amongst S-type asteroids, Juno is unusually reflective, which may be indicative of distinct surface properties. This high albedo explains its relatively high apparent magnitude for a small object not near the inner edge of the asteroid belt. Juno can reach +7.5 at a favourable opposition, which is brighter than Neptune or Titan, and is the reason for it being discovered before the larger asteroids Hygiea, Europa, Davida, and Interamnia. At most oppositions, however, Juno only reaches a magnitude of around +8.7[16]—only just visible with binoculars—and at smaller elongations a 3-inch (76 mm) telescope will be required to resolve it.[17] It is the main body in the Juno family.

Juno was originally considered a planet, along with 1 Ceres, 2 Pallas, and 4 Vesta.[18] In 1811, Schröter estimated Juno to be as large as 2290 km in diameter.[18] All four were reclassified as asteroids as additional asteroids were discovered. Juno's small size and irregular shape preclude it from being designated a dwarf planet.

Juno orbits at a slightly closer mean distance to the Sun than Ceres or Pallas. Its orbit is moderately inclined at around 12° to the ecliptic, but has an extreme eccentricity, greater than that of Pluto. This high eccentricity brings Juno closer to the Sun at perihelion than Vesta and further out at aphelion than Ceres. Juno had the most eccentric orbit of any known body until 33 Polyhymnia was discovered in 1854, and of asteroids over 200 km in diameter only 324 Bamberga has a more eccentric orbit.[19]

Juno rotates in a prograde direction with an axial tilt of approximately 50°.[20] The maximum temperature on the surface, directly facing the Sun, was measured at about 293 K on October 2, 2001. Taking into account the heliocentric distance at the time, this gives an estimated maximum temperature of 301 K (+28 °C) at perihelion.[8]

Spectroscopic studies of the Junonian surface permit the conclusion that Juno could be the progenitor of chondrites, a common type of stony meteorite composed of iron-bearing silicates such as olivine and pyroxene.[21] Infrared images reveal that Juno possesses an approximately 100 km-wide crater or ejecta feature, the result of a geologically young impact.[22][23]

Radio signals from spacecraft in orbit around Mars and on its surface have been used to estimate the mass of Juno from the tiny perturbations induced by it onto the motion of Mars.[27] Juno's orbit appears to have changed slightly around 1839, very likely due to perturbations from a passing asteroid, whose identity has not been determined.[28]

In 1996, Juno was imaged by the Hooker Telescope at Mount Wilson Observatory at visible and near-IR wavelengths, using adaptive optics. The images spanned a whole rotation period and revealed an irregular shape and a dark albedo feature, interpreted as a fresh impact site.[23]

Retrieved from "https://thesciencearchives.miraheze.org/w/index.php?title=3_Juno&oldid=3457"
Categories:
Cookies help us deliver our services. By using our services, you agree to our use of cookies.