From the Science Archives, the open-project database of science information that barely anyone can edit
Jump to navigation Jump to search
The printable version is no longer supported and may have rendering errors. Please update your browser bookmarks and please use the default browser print function instead. 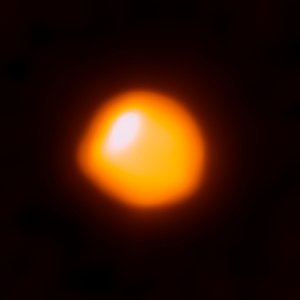 This orange blob shows the nearby star Betelgeuse, as seen by the Atacama Large Millimeter/submillimeter Array (ALMA). This is the first time that ALMA has ever observed the surface of a star and this first attempt has resulted in the highest-resolution image of Betelgeuse available.

Betelgeuse, also designated Alpha Orionis (α Orionis, abbreviated Alpha Ori, α Ori), is the 9th brightest star in the night sky and second-brightest in the Orion constellation. It is distinctly reddish, and is a semiregular variable star whose apparent magnitude varies between 0.0 and 1.3, the widest range of any first magnitude star. Betelgeuse is one of three stars that make up the Winter Triangle asterism, and it marks the center of the Winter Hexagon. It would be the brightest star in the night sky if the human eye could view all wavelengths of radiation.

Classified as a with a spectral type M1-2, the star is one of the largest and most luminous stars visible to the naked eye. If Betelgeuse were at the center of the Solar System, its surface would extend past the orbit of Jupiter. Having been ejected from its birthplace in the Orion OB1 Association, which includes the stars in Orion's Belt, this runaway star has been observed moving through the interstellar medium at a speed of 30 km/s, creating a bow shock over four light-years wide. Currently in a late stage of stellar evolution, the supergiant is expected to explode as a supernova within the next 10 to 1,000 years. The angular diameter of Betelgeuse is only exceeded by R Doradus, not including the Sun.

On 13 December 1920, Betelgeuse became the first star outside the Solar System to have the angular size of its photosphere measured.[17] Although interferometry was not yet widely developed, the experiment proved successful. The researchers used a uniform disk model to determine that Betelgeuse had a diameter of 0.047 arcseconds, although the stellar disk was likely up to 17% larger due to the limb darkening, resulting in an estimate for its angular diameter of about 0.055".[17][18] Since then, other studies have produced angular diameters that range from 0.042 to 0.069 arcseconds.[19][20][21] Combining these data with historical distance estimates of 180 to 815 ly yields a projected radius of the stellar disk of anywhere from 1.2 to 8.9 astronomical units.[note 1] Using the Solar System for comparison, the orbit of Mars is about 1.5 AU, Ceres in the asteroid belt 2.7 AU, Jupiter 5.5 AU—so, assuming Betelgeuse occupying the place of the Sun, its photosphere might extend beyond the Jovian orbit, not quite reaching Saturn at 9.5 AU.

Betelgeuse's precise diameter has been hard to define for several reasons:

Which part of the electromagnetic spectrum—the visible, near-infrared (NIR) or mid-infrared (MIR)—produces the most accurate angular measurement is still debated.[note 1] In 1996, Betelgeuse was shown to have a uniform disk of 56.6 ± 1.0 mas. In 2000, the SSL team produced another measure of 54.7 ± 0.3 mas, ignoring any possible contribution from hotspots, which are less noticeable in the mid-infrared.[20] Also included was a theoretical allowance for limb darkening, yielding a diameter of 55.2 ± 0.5 mas. The earlier estimate equates to a radius of roughly 5.6 AU or 7003120000000000000♠1200 R☉, assuming the 2008 Harper distance of 197.0 ± 45 pc,[13] a figure larger than the orbit of Saturn. A team of astronomers working in the near-infrared announced in 2004, that the more accurate photospheric measurement was 43.33 ± 0.04 mas.[24] The study also put forth an explanation as to why varying wavelengths from the visible to mid-infrared produce different diameters: the star is seen through a thick, warm extended atmosphere. At short wavelengths (the visible spectrum) the atmosphere scatters light, thus slightly increasing the star's diameter. At near-infrared wavelengths (K and L bands), the scattering is negligible, so the classical photosphere can be directly seen; in the mid-infrared the scattering increases once more, causing the thermal emission of the warm atmosphere to increase the apparent diameter.[24] 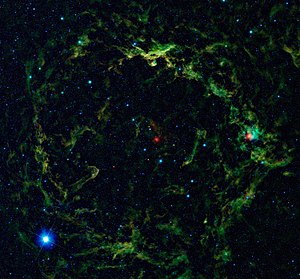 Infrared image of Betelgeuse, Meissa and Bellatrix with surrounding nebulae

Studies with the IOTA and VLTI published in 2009 brought strong support to Perrin's analysis and yielded diameters ranging from 42.57 to 44.28 mas with comparatively insignificant margins of error.[27][28] In 2011, a third estimate in the near-infrared corroborating the 2009 numbers, this time showing a limb-darkened disk diameter of 42.49 ± 0.06 mas.[29] Consequently, if one combines the smaller Hipparcos distance from van Leeuwen of 152 ± 20 pc with Perrin's angular measurement of 43.33 mas, a near-infrared photospheric estimate would equate to about 3.4 AU or 730 D☉.[30] Central to this discussion, it was announced in 2009, that the radius of Betelgeuse had shrunk from 1993 to 2009 by 15%, with the 2008 angular measurement equal to 47.0 mas, not too far from Perrin's estimate.[18][31] Unlike most earlier papers, this study encompassed a 15-year period at one specific wavelength. Earlier studies have typically lasted one to two years by comparison and have explored multiple wavelengths, often yielding vastly different results. The diminution in Betelgeuse's apparent size equates to a range of values between 56.0 ± 0.1 mas seen in 1993 to 47.0 ± 0.1 mas seen in 2008—a contraction of almost 0.9 AU in 15 years. What is not fully known is whether this observation is evidence of a rhythmic expansion and contraction of the star's photosphere as astronomers have theorized, and if so, what the periodic cycle might be, although Townes suggested that if a cycle does exist, it is probably a few decades long.[18] Other possible explanations are photospheric protrusions due to convection or a star that is not spherical but asymmetric causing the appearance of expansion and contraction as the star rotates on its axis.[32]

The debate about the vast differences between measurements in the mid-infrared, which suggest a possible expansion and contraction of the star, and the near-infrared, which advocates a relatively constant photospheric diameter, which remains to be resolved. But in a paper published in 2012, the Berkeley team reported that their measurements were "dominated by the behavior of cool, optically thick material above the stellar photosphere," indicating that the apparent expansion and contraction may be due to activity in the star's outer shells and not the photosphere itself.[33] This conclusion, if further corroborated, would suggest an average angular diameter for Betelgeuse closer to Perrin's estimate at 43.33 arcseconds, hence a stellar radius of about 3.4 AU (730 D☉) assuming the shorter Hipparcos distance of 498 ± 73 ly in lieu of Harper's estimate at 643 ± 146 ly. The Gaia spacecraft may clarify assumptions presently used in calculating the size of Betelgeuse's stellar disk.

Once considered as having the largest angular diameter of any star in the sky after the Sun, Betelgeuse lost that record in 1997 when a group of astronomers measured R Doradus with a diameter of 57.0 ± 0.5 mas, although R Doradus, being much closer to Earth at about 200 ly, has an actual roughly one-third that of Betelgeuse.[34]

The generally reported radii of large cool stars are Rosseland radii, defined as the radius of the photosphere at a specific optical depth of two thirds. This corresponds to the radius calculated from the effective temperature and bolometric luminosity. The Rosseland radius differs from directly measured radii, but there are widely used conversion factors depending on the wavelength used for the angular measurements.[35] For example, a measured angular diameter of 55.6 mas corresponds to a Rosseland mean diameter of 56.2 mas. The Rosseland radius derived from angular measurements of the star's photosphere rather than an extended envelope is 887 D☉.[12]

Betelgeuse is a red supergiant that has evolved from an O-type main sequence star, which was very similar to the other stars of Orion. Its core will eventually collapse, producing a supernova explosion and leaving behind a compact supernova remnant. The details depend on the exact initial mass and other physical properties of that main sequence star.

Retrieved from "https://thesciencearchives.miraheze.org/w/index.php?title=Betelgeuse&oldid=15222"
Categories:
Cookies help us deliver our services. By using our services, you agree to our use of cookies.